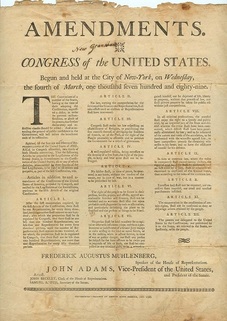 Undergoing the foundation of our nation, our founding fathers gave our people their rights under a Constitution. The United States Constitution gave our nation the basic principles and laws to how our government should be ran. But during the Plessy vs. Ferguson case, Homer Adolph Plessy felt robbed of his constitutional rights, saying that his case was being violated by the 13th and 14th amendments....

Problems with the 13th amendment- The 13th amendment states: "Neither slavery nor involuntary servitude, except as a punishment for crime whereof the party shall have been duly convicted, shall exist within the United States, nor any place subject to their jurisdiction" (Library of Congress). Obviously, Plessy was being violated of his rights due to his color of skin. He argued that he should not be denied of any rights of citizenship. But the state of Louisiana argued that the 13th amendment was only in relation to slavery.

Problems with the 14th Amendment - The 14th amendment states: "All persons born or naturalized in the United States, and subject to the jurisdiction thereof, are citizens of the United States and of the state wherein they reside. No state shall make or enforce any law which shall abridge the privileges or immunities of citizens of the United States; nor shall any state deprive any person of life, liberty, or property, without due process of law; nor deny to any person within its jurisdiction the equal protection of the laws" (Library of congress). The main part of the 14th amendment is that it gave the people an EQUAL protection of the laws. You would think that the states would see everyone equally, but youre wrong. Through the 14th amendment, it created the Equal-Protection clause which guaranteed political, legal but not social equality (wrytestuff.com). Plessy believed that should not have been required to give up any public right or access. The Louisiana law violated the Equal Protection Clause and was, therefore, unconstitutional (Plessy v. Ferguson). Ferguson argued that 14th amendment was not intended to give African Americans social equality but only political and civil equality with white people (Plessy v. Ferguson).